Rising right along with the current epidemic of military suicides is the huge increase in the number of psychiatric drug prescriptions written for active military and veterans. 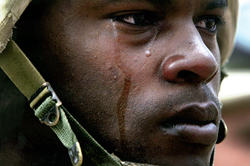 Fact:   There are nearly 50 international drug-regulatory agency warnings that psychiatric drugs – including antidepressants – can cause suicidal thoughts and suicide.

Fact:   Military veterans are committing suicide at the staggering rate of 22 every day.

“If you take a look at people who commit suicide, most of those people – I would say as much as 80% – are on some type of psychiatric medication where there’s a black box warning…for suicidality, poor judgment and reasoning, anger and hostility, which can translate to homicide, depression, etc.”

“In my 47 years of treating people, although I had access to using psychiatric medication, I never recommended a single psychiatric drug. In all these years, I can state unequivocally, I therefore never had a person commit suicide or a homicide while in my care.”

WARNING: Anyone wanting to discontinue psychiatric drugs is cautioned to do so only under the supervision of a competent medical doctor because of potentially dangerous withdrawal symptoms.

To view the Citizens Commission on Human Rights (CCHR) documentary detailing how psychiatry uses the military as its testing ground, click here and then click on “Military Documentary.”

If you or someone you know has been harmed by psychiatric drugs or other mental-health treatment, we want to talk to you.  You can contact us privately by clicking here or by calling 303-789-5225.  All information will be kept in the strictest confidence.  We welcome your comments below.